Why some games got a nearly perfect score of 10/10 and some other game using the same mechanic got a score of 5/10?

This is a video of the first time user experience of James Cameron’s Avatar. You should take a look at 9:05 and pay attention to the player first encounter.

Now, take a look at Gears of War 2 at the 5:25 and pay attention to the player first encounter.

In the Avatar game, the first encounter (The dogs) is a small enemy, that moves really fast, that is often not visible to the player and there’s a lot of them. The player must hit multiple bullets on each target and there’s multiple of them.

In Gears of War 2, the first encounter (The bomb) is a good size on the screen, don’t move, is always visible to the player and there’s only one that is taking eliminating a bunch of enemies at the same time. The player must only hit one bullet on the bomb to make it explode.

Gears of war have been built with having the player skill’s challenge in mind while Avatar doesn’t. Gears of war first encounter challenge minimum player skills while Avatar first encounter is challenging the player with all his parameter set at the most difficult rate. I’m pretty sure that the equivalent enemy can be found nearly to the end of the game in Gears of war. This is where Bottom up process and Atomic design can make a difference to your game.

The top down process is most of the time feed by aesthetics and story. These are useful for the brainstorm session, clarify the idea and even sell the idea. Unfortunately, great ideas and the visually stunning ideas don’t mean that it will result in an awesome gameplay and player experience. And as game developers, we should spend most of our time focus more on gameplay and player experience than visual and storyline.

At one point, after that you high-level concept has been approved by your client, you must take a step back, put it on the side and stop thinking about it. 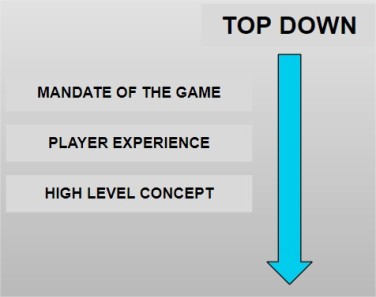 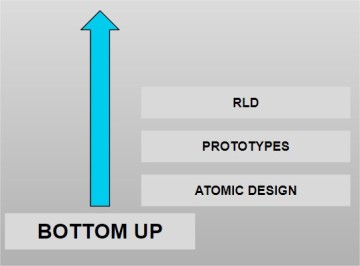 I don’t say that bottom up process is the only way to go, my point is that use it to a certain point and then after that, do your designer jobs.  My game design formation offer on this website will focus more on the bottom up process than the top down process. I have the chance to work with around 30 games designers and teach to another 30 designers and few of them really have a designer thinking. That formation will give you learning and tools to get that design thinking and communicate it in a more efficient way and the most important of all, create a better game.

If you are convinced, it’s time for you to pass at the next step of the game design fundamentals